Achieve MISRA C 2012 compliance without disrupting your entire development process. It’s all in using a phased approach with a clearly defined endpoint.

Gain a full understanding of how to effectively leverage static analysis in conjunction with automated unit testing, test management and analytics to make a powerful tool suite to achieve MISRA compliance efficiently. 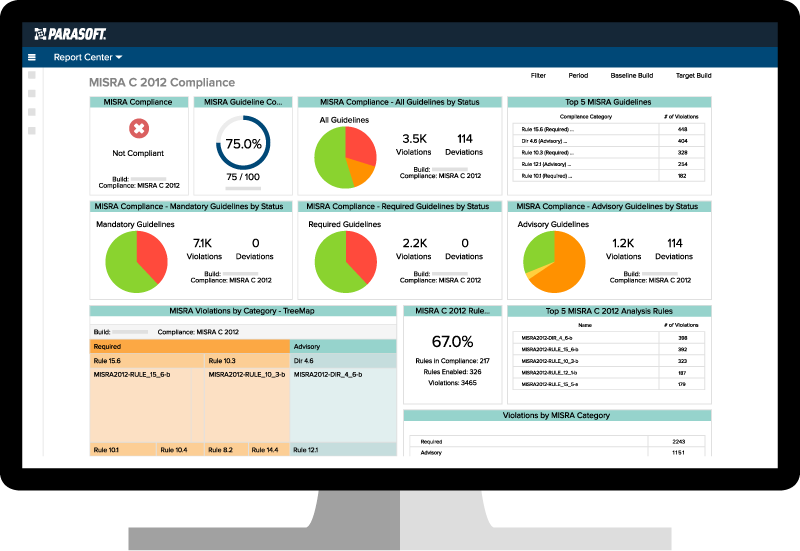 Download the whitepaper to learn the process of achieving, documenting and maintaining MISRA compliance with test automation.

The original MISRA principles were created to be applied as code was being developed. Even the document itself has a warning:

“...a project that checks for MISRA C compliance late in its cycle is likely to spend a considerable amount of time re-coding, re-reviewing and re-testing. It’s therefore expected that the software development process will require the early application of MISRA C principles.”

Because many organizations need to reuse legacy codebases, the MISRA Compliance: 2016 guidance document was created in response. There’s clear distinction between the new, native code developed in the scope of a current project and the “adopted” code developed outside of the scope of the project.

For example, an initial prototype developed without following MISRA guidelines is productized, but then management realizes that compliance is a requirement for the intended marketplace. Typically, the legacy codebase was never developed with coding guidelines in mind. As a result, a codebase can’t be automatically classified as “adopted code” if updates are required in the context of a new project adding to the complexity of the situation.

Fortunately, there are ways to make code compliant without interfering with ongoing development, explained in detail in the full whitepaper.

In response, the MISRA Consortium provided a reasonably well-defined framework of what MISRA compliant truly means in the document MISRA Compliance: 2016. The document is helping organizations use a common language articulating compliance requirements by defining several artifacts.

The key document for focusing on what to do with legacy and existing code is the Guideline Re-categorization Plan, which captures all directives and rules and identifies which categories have been re-categorized.

The MISRA Com­pliance: 2016 document has worked to clear this up. A recommended approach to improving the evaluation of compliance readiness is to use existing templates for both the final compliance and tool qualification report.

To combat the tendency to add more information into the reports than is required, refer to the list provided by MISRA Compliance 2016: